Increasing your ADSL speeds via ringwire

I’m amazed that this actually worked, but it’s true!

I live in a little village not to far away from a main town, but due to this some people are on Virgin Media cable and others are not so lucky having to suffer abysmal speeds of British Telecom’s non-financially rewarding 1/2Mbit broadband.  A few of my friends pay for Talk Talk and BT to supply them with up to 8Mbit but can get no where near this speed due to the local hub never being upgraded.

Now, this is not actually the case at all it seems.  There is a ring wire (orange) inside of the Master socket which, when disconnected, seems to increase your speed by a fair amount. 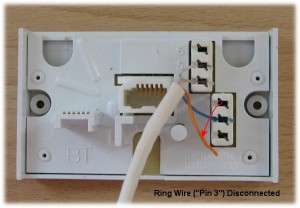 With a Philips screw driver, remove the front panel of the master socket, pocket it out, and then pull the orange wire(s) out of the clamp.  Now, tuck them back neatly and jobs done.

I’ve just witnessed a leap from 0.5Mbit to 3.12Mbit and another similar to 1.6Mbit.  This works and doesn’t effect your phone system, unless you have an old analogue phone which uses the ring wire to literally do just that, ring.  Anything digital doesn’t require this and since most homes are now digital phones it should not be required 🙂  Happy speed increasing.

31 thoughts on “Increasing your ADSL speeds via ringwire”